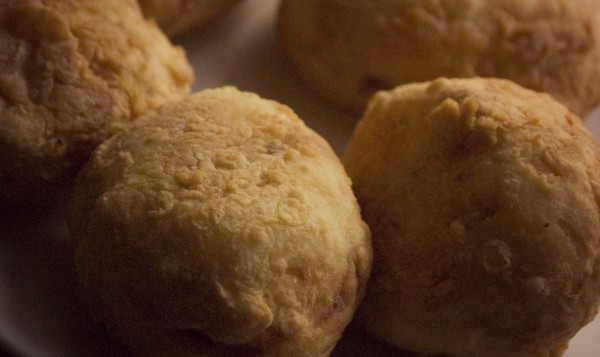 While in Miami a few years ago I wandered into a small Cuban restaurant looking for a snack. What I found was great ball potato bliss. A Papa Rellena is a meat stuffed potato ball that is then deep-fried till golden brown. I don’t know what more I can say other than make these and enjoy! 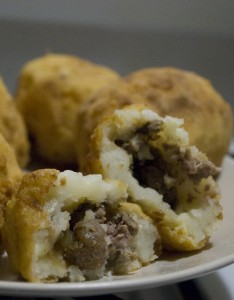 There’s a lot of prep work, bit trust me it’s worth it!

Start a large pot of salted water on high, cover and let reach a rolling boil. While waiting on the water prep, your veggies. Dice your onions and mince your garlic as fine as you can. Peel your potatoes and cut them into cubes.

In a skillet over medium heat, add enough olive oil to coat the pan. Add your onions and a pinch of salt.  Once translucent, add your garlic and stir for about 2 minutes. Next, add the meat and cook until just about done. (Your water is hopefully boiling by now so add your potatoes and cook until JUST fork tender. DO NOT OVER COOK!) Now raise the temperature on the meat to medium high and add apple cider vinegar, cumin, adobo, thyme and cinnamon. Cook until the ACV has almost cooked out of the mixture and the flavors have melded. Remove from heat and place meat on a towel to cool/drain.

When the potatoes finish, run them through a strainer, next run cold water over them, and then set aside to cool.

While the potatoes are cooling, get three dishes out to prepare to coat your Papa Rellenas. Put your eggs in one and whisk together. Then split your flour between the other two. Also, get your deep frying apparatus set. You want enough oil to at least come up half way on the Papa Rellenas. 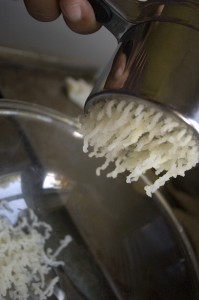 OK…with the prep work done and we can begin making the Papa Rellenas!

Take your cooled potatoes and put them through a ricer.  The ricer will help remove any lumps and make for a smooth meat pocket.

Now, sprinkle in some salt and pepper, put some flour on your hands, and then make a large potato ball. You want to mix all the potatoes up well until you have what looks like an un-molded clay-mation face! After you make a few different faces (I dare you not to try) take about a handful of potato and make a flat circular disk. Flour your hands as needed to make sure the potatoes don’t stick.

To your lovely disc o’ potato, add some filling. I’d say about 1/4 of the amount of potato that you have in your hand. Press it into the middle and make a potato ball. When done it should look like…well, a peeled 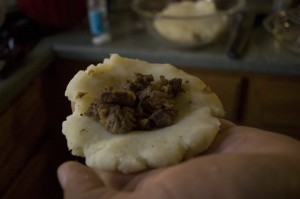 potato. When making these, they can range from bite size to potato size. Nobakeleni pointed out that I have humongous hands so my handfuls of potato were quite large. Keep this in mind. 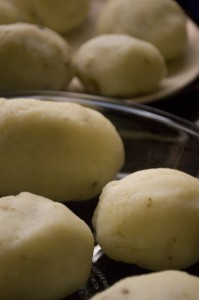 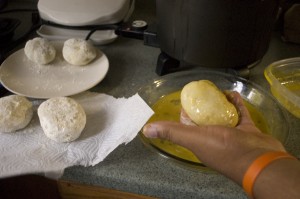 Now take your Papa Rellanas and start the coating. Roll in flour and shake off excess. Then roll in egg and then flour again and shake. Work your way through all of them and set then on a dry paper towel. Once they are all done, plop your first batch in the fryer!

After a few seconds, give your potatoes a little nudge, just to make sure they do not stick to the bottom. I ran into this on my first batch (which is where the second coat of flour came from). You want to make sure that they don’t stick because if they do, you can’t turn or remove them cleanly. After a minute or so, turn them over and then nudge in a few seconds again. Now the coating has set in and you shouldn’t have any issues with stickage. Continue to cook and roll (…I like that phrase!) until the crust is a nice golden brown. Remove and drain on a towel. Give the oil a few minutes to come back up to temp and add the next batch. Continue till done!

The end result is a slightly crisp outside followed by a layer of fluffy potato and finished with meaty goodness. Go ahead and enjoy…you can thank me later! 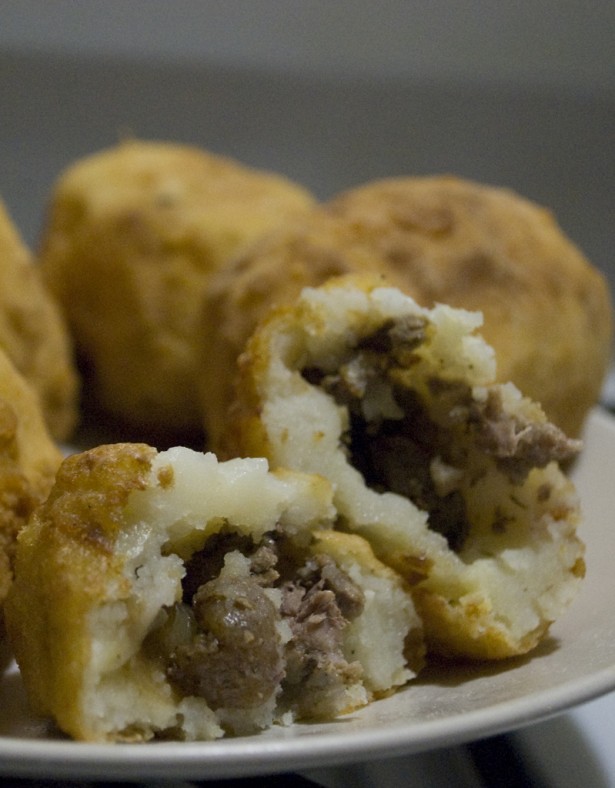