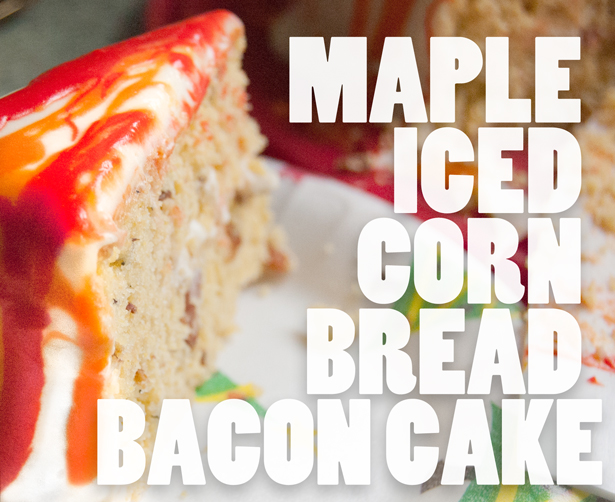 Do you love bacon? How about maple syrup? If you’re like me, you love anything that just reminds you of breakfast.

It’s no coincidence that this bacon cake is a tad on a sweet side to balance the salty bacon bits. I’ve made this into a three mini layer cake in my smallest cast iron skillet and a two layer in my largest. It was amazing looking. This recipe, with syrup, is slightly sweeter and much kinder to the arteries. I think. I’m not a doctor, I only pretend to be one. 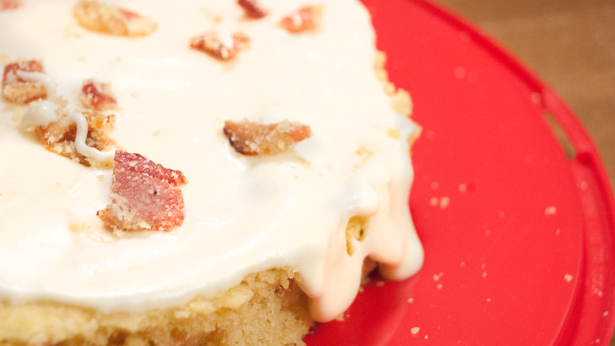 Bacon topping isn’t necessary.  Though one time I tried to death-by-bacon-cover it. A little orange and red food coloring drizzled looks porky.  Both look delicious, but one has less chances of bringing you closer to death. 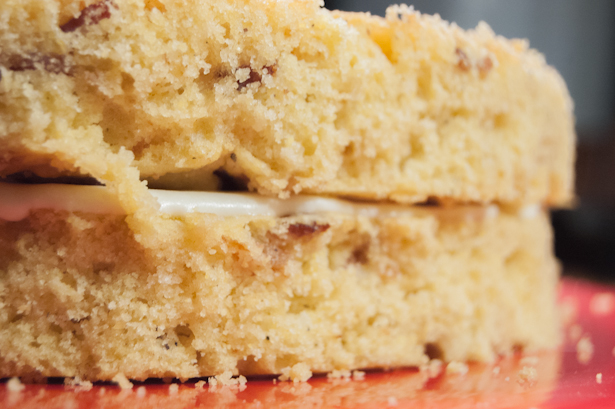 What follows are basic cake prep directions. Yes, you can shave and line up the layers perfectly, but for the purposes of a bacon cake this was perfect. The cornbread doesn’t rise much, and while it looks a tad imperfect – it still tastes perfect.

You’lI feel good for having made it, eaten it, and even shared it. Can it be birthday time again? I’ll make you cake. Promise. 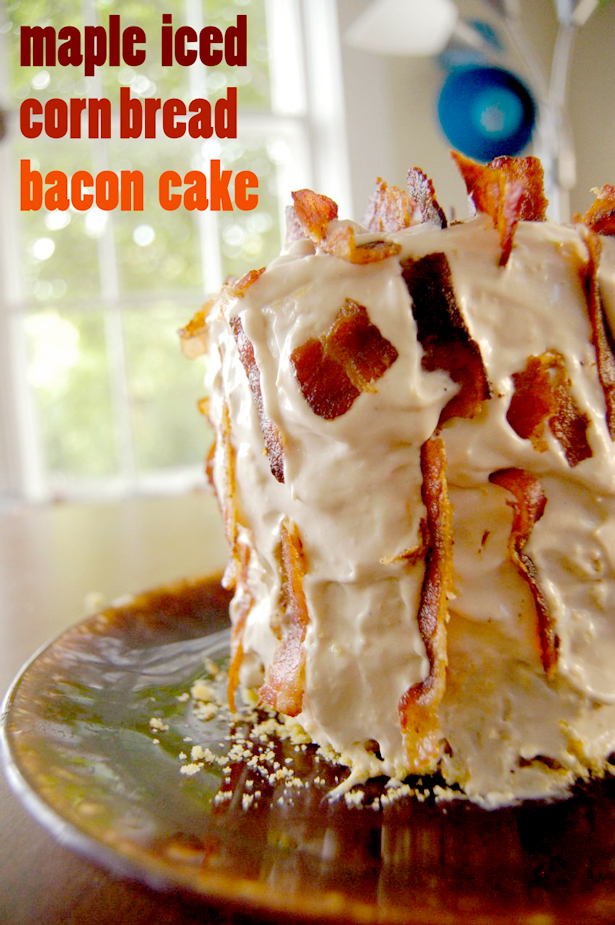 Maple Iced Bacon Corn Bread Cake Recipe
By Eleni Konstas on 03/26/2013
Do you love bacon? How about maple syrup? This recipe is slightly sweet & kinder to the arteries. Sorta.

Ingredients:
Instructions:
Preheat oven at 400 degrees. Sift together cornmeal, flour, sugar, baking powder and salt in a large bowl. In a small bowl, beat the eggs. Mix milk and bacon fat into the eggs. Create a well in the dry mix, and then add in half of your wet mixture. Mix in bacon pieces, then mix in the rest of the wet. Spread out half of the batter evenly in your (preferably) bacon greased cast iron skillet. Bake 20 – 25 minutes or until a toothpick once inserted comes out clean. Let sit in pan for 5 to 10 minutes, then pop out onto a rack to cool. Duplicate this process for additional layers.

Bring ingredients to a boil. Lower temperature to simmer or off. Using a measuring cup, measure out a ¼ cup to drizzle over your cake while still hot. When the second layer is hot, drizzle another ¼ cup over it.

Bring remaining mixture back to a boil until thickened to add to your icing.

Whip butter and cream cheese together until light and fluffy. Add sugar and syrups and continue to whip well.

Ice top of cake layer number one and place second layer on top, slowly. Ice the cake as a whole. Cover in more bacon for a heart attack inducing look, or reserve icing to warm, color, and drizzle in bacon shades. Whatever you do, you’ll love it. There’s no way to go wrong with bacon after all.

We made extra sexy bacon cake pictures to share as well. Because sharing is caring, and it’s easier to share a recipe than it is to share your bacon! 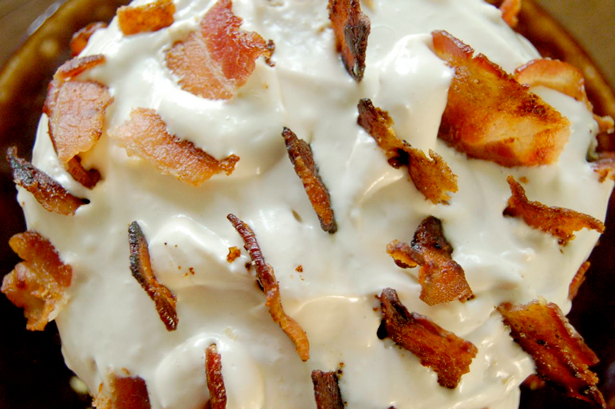 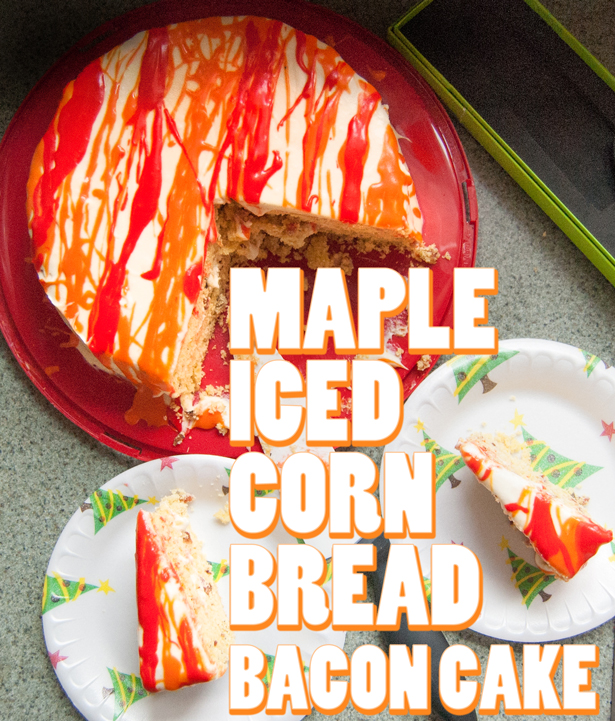 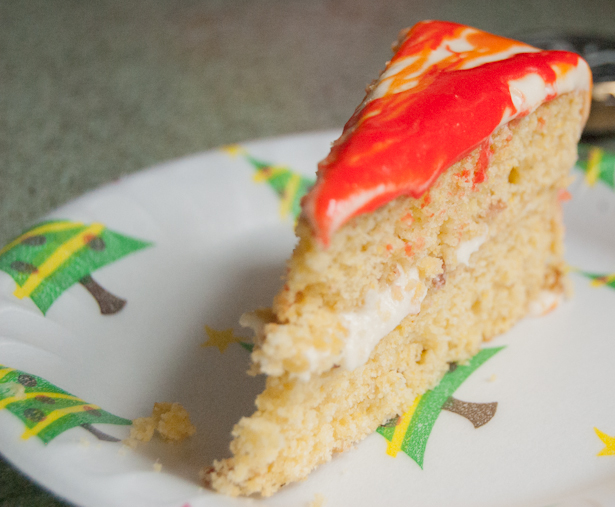 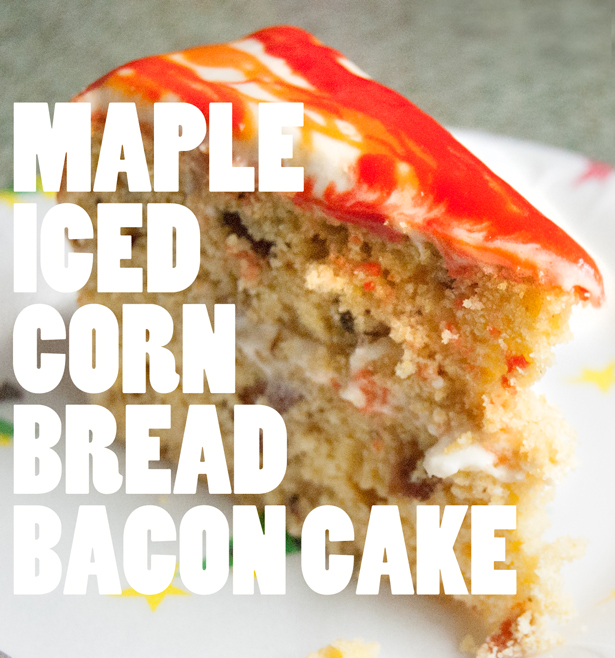 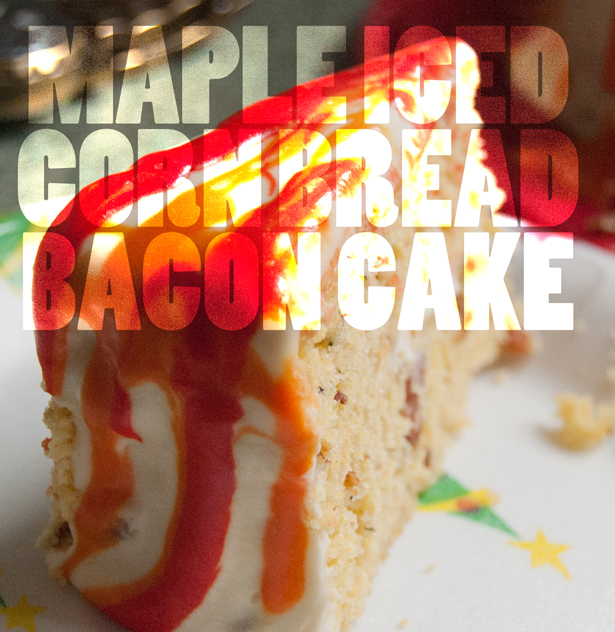