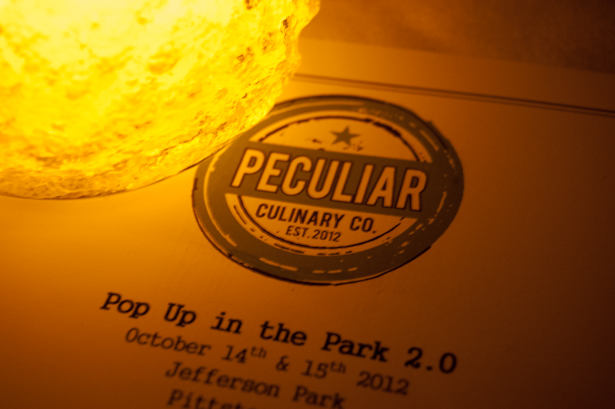 “There’s spots opened up for the Pop Up in the Park!” There’s nothing as exciting as getting in at the last minute to a dinner you were sure that you were going to miss, again. And be mournful about. Again. When I realized that we, Whiskey Bacon, could grabbed last minute open spots at the Peculiar Culinary Co. Pop Up in the Park, there was dancing. Then reading of the menu, during which I could hear Whiskey Beard salivate over the phone.

The BYOB event was held in a  candle lit recreation building at Jefferson Park in Pittston. Table linens, water glasses, a full setting, and tables filled with brews and beers, you wouldn’t think you were in park. They really pulled together an elegant, classy experience. I felt fancy! Which, is pretty hard to do even in a dress! (Thankfully I wore a dress!) For my first ever six course meal, I felt like Neil Patrick Harris (He tweets 8 and 16 course meals @NPHFoodPorn.) It was funny that both Whiskey Beard and I meant to pick up wine for the event, but because of a series of fun-fortunate events had pumpkin beers. Which was totally appropriate. There were plenty more beers, growlers  and people reading riddles from inside their beer caps than quiet, wine sippers. 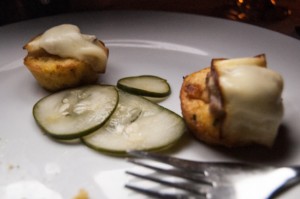 My favorite dish by far. A braised pork belly, bourbon red onion marmalade, and smoked cheddar on top of a soft warmed chive corn bread muffin. I could eat like twenty of these. Just a whole melt in your mouth, all the tastes combined perfectly. A flavor explosion.

Pickled garlic and cucumbers were also a lovely and refreshing treat in between. 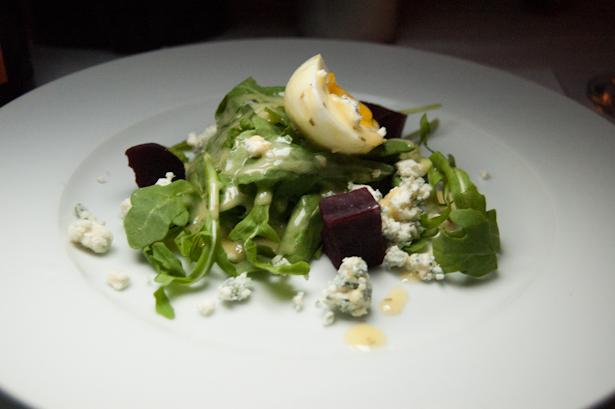 The salad of dreams. I’m not exactly a huge fan of salads, though I eat them regularly. But I love a well made salad. The vinaigrette, the six minute egg, the argula; my dream salad. I am definitely a huge fan of the two flavors, a Rosenberg Danish Cave Aged Bleu cheese and Champagne Tarragon Vinaigrette. What are these words? I don’t know, but they make me happy. I overheard a nearby dinner remark how light the vinaigrette was, and just perfectly so. I had to agree. It was a perfect balance. 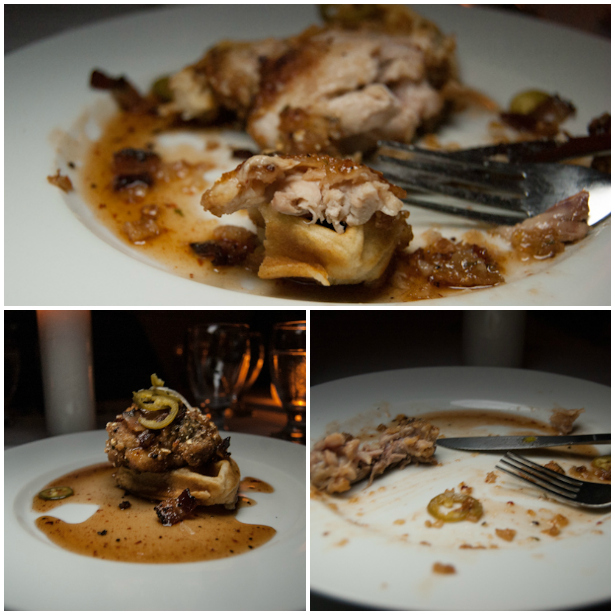 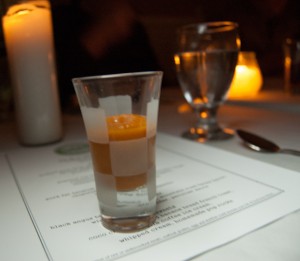 A mix of sweet and spicy, this waffle sandwich was Whiskey Beard’s highlight of the meal. The chicken and the waffle were both nice and crispy, but what stole the show was the chipotle syrup. It had a kick, but ever so subtle. It was just present enough and by the end of the course, you could tell you’d eaten a spicy treat, but never over powered you. Juicy moist chicken, thick and fluffy waffle. The course was amazing. The only thing I would have changed was going with a boneless chicken thigh, but that’s truly the only complaint.

A sparkling pumpkin pie in a shot glass. This chilled treat wasn’t sweet, but tasted like real pumpkins. That was the real catch…it was pumpkin. Not pumpkin spices, but pumpkin. Upon realizing this Whiskey Beard (because he’s odd this way) offered me his. The man doesn’t like pumpkin (Or chocolate. We’re running test to make sure he’s human.) This could have been desert and I would have been happy. 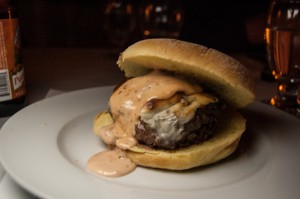 The bacon lattice was juicy and delicious, it could be it’s own appetizer. The Peculiar sauce, the flavors of brioche, sharp cheddar, and it’s just a fantastic burger. Here’s our only sour point.

The burger was an eh burger.  Of the typical burger in a six course meal of magic rates at a tad disappointing. The bun was un-toasted as well. (We’re toasted bun people!) The idea of the burger and the words that accompanied made our mouths water…but when we got it…it was a burger. A good burger, but…just a burger. It was your typical meat patty, but we’ll concede that the night before at 2.0, a friend said his was perfectly moist, flavorful, and he was served among the first of his table. 100 some odd burgers later…we get that. The bacon lattice though, we’d eat a burger made of just that. [Scratch that] We want a burger of just that! 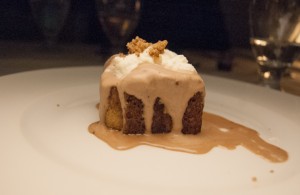 Course 6: Sweets
Nutella coffee ice cream melted around the warm banana bread french toast. Not too sure how you make homemade pop rocks but those and coco crispies added a touch of texture. I saw the girl across from us practically clean her plate. I was jealous. No clue how she managed that without literally licking the plate clean. Even liked the whipped cream, which was more milky than fluffy and sugar crazy.

Like honestly, what they’re doing with this Pop Up is amazing. Just stupendous. Different, fun and just really great food. (And live music!) Food is meant to be fun and an experience…Peculiar gets that and embraces it wholly. And it won’t be back until December for an anti-Thanksgiving dinner, so seriously watch out for when tickets go on sale, as they sold out within hours for this one. Be sure to like ’em Peculiar Culinary Company on Facebook to know when tickets go on sale.