Kevin’s Bar and Restaurant…the most inappropriately named place you could ever visit in NEPA. The outside? Simple and unassuming. The name makes you think that it’s a neighborhood hangout. Wrong, very wrong. Kevin’s is more of a classic Chicago steakhouse. Dimly light, great beer, wine and cocktails, and dishes that will blow your mind! From the Kobe beef to the multitude of risottos to the New Zealand lamb, “bar and restaurant” are probably the last two words most would use to describe this hidden gem!

I often dream of a great risotto, only to be let down. I began to think I had dreams too big for one risotto. This however was soft and moist in all the right ways, with tender, seasoned shrimp and clams that were complimented with a flavorful tomato sauce. Whiskey Beard makes a great shrimp, but ahem, these were even better. If shrimp could melt in your mouth, I think it would taste something like this. Another of our Whiskey Bacon party and myself choose a milder level of spice, and were both a bit disappointed that it lacked any kick at all, so if you like a little kick, go for more than mild. 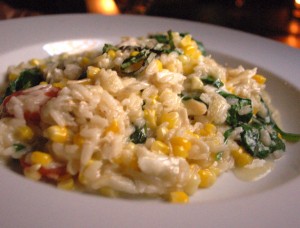 AhYumBanana and I were so torn by the prospect of a good risotto, we decided to split two. Right? No better decision has ever been made in the history of dining. Forget that other risotto. No really. This roasted, creamy corn with Asiago cheese was the risotto of dreams.  Well, mine at least. The tender crab meat played right into the soft, delectable nature of the rice.

Curlz of cavatappi pasta wrapped around big bites of lobster. There literally had to be a least half of a lobster in there, maybe more. This mac and cheese contained all the joys of eating a well done lobster roll, the taste of cooper and gouda cheeses, the hearty lobster presence  and filling nature. It really is a large appetizer, though it didn’t spoil my appetite   There just wasn’t a HUGE crazy cheese going on, which, is sort of my guilty mac and cheese pleasure. 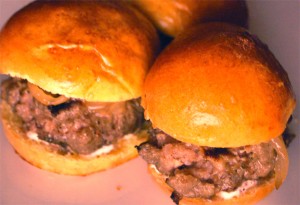 …Ugh. These were delicious. The Kobe was seasoned perfectly…and by perfectly, I mean barely. This allows for the flavor of the Kobe to come through and not be masked. Tender, buttery and melts in your mouth…nom. Perfectly caramelized onions and just a hint of spice from the horseradish sauce. So why the ugh? There were only three of them. I get they are wonderful and a very sexy cut of beef…but for $12…I expected four sliders. Again, great sliders, just not enough of them. 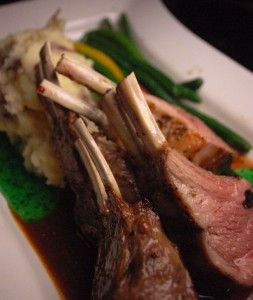 The lamb was from New Zealand and was magnificent. Ordered medium rare, it was seared perfectly on the outside and tender and flavorful on the inside. Like having a tootsie pop…only made of meaty heaven, on a stick. Served over garlic mashed potatoes with veggies on the side. My mouth is watering all over again. While the lamb was beyond awesome, the star for me was the mint coulis. The dish was served with two sauces, a roasted garlic & Dijon demiglace and mint coulis. The garlic demiglace was good; tasty and garlicky with a slight kick. The mint coulis though…wow. I always expect a mint sauce to taste like a pack of spearmint gum…the whole pack. The sweetness of the sauce helped to cut the pungent nature of the mint and left you with a bright refreshing addition to the lamb. The whole dish, perfectly executed! 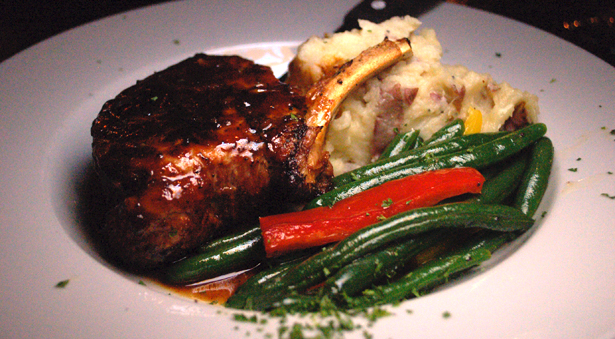