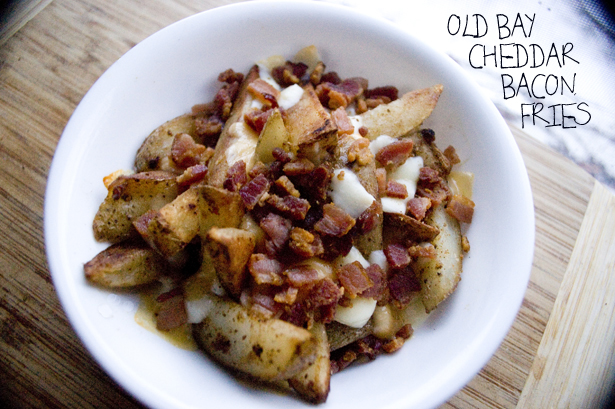 So there’s this brewpub in my hometown called Mad Anthony’s that used to be know as the Munchie Emporium and they serve these great fries/potatoes called Scooby Snacks.  Yes, go to ‘Munchies’ and order Scooby Snacks. (Did I mention they opened in the sixties and were an old hippy haunt?!)

So these Scooby Snacks were just about the greatest thing ever. I had them before I really started exploring food, so I was mesmerized by them. They were more crispy potato than french fry and were a must every visit. The key though, was the seasoning and the dip. A spicy herb blend that I couldn’t put my finger…or tongue, on. Then I moved to Maryland. BOOM, Old Bay, that’s all. Years trying to figure this out and at a crab boil I realized it was old bay seasoning. Served with a cucumber dill sauce, they are still some of my favorite fried potatoes, just less mysterious. Thus being the inspiration for this dish.

These crispy potatoes aren’t deep fried. Thick cut boiled potatoes that are then pan fried, like a baked potato with a crispy outside. How is that bad!?! Then smothered with cheddar cheese and bacon. Comfort food on crack! The end result is a salty, spicy, cheesy bowl of potatoes that will make you all kinds of happy inside. Old Bay and potatoes in a crab boil is one thing, but on crispy potatoes… yeah, epic. Next thing you know you’ll be putting Old Bay on everything, like our stovetop popcorn!

Ingredients:
Instructions:
Preheat oven to 400. Take your potatoes and cut them into thick french or steak fries sized pieces. Add potatoes to a pot of heavily salted water, there should be about 1 inch of water above the potatoes. Cook until tender when poked with a fork. Dice your bacon and cook pan until crisp. Remove and drain the bacon. Keep about a 1/2 tbsp of bacon fat in the pan. Turn off the heat, then add the olive oil and butter to your pan. When the potatoes are done, carefully drain and then add them to the pan. Turn the heat to high, and keep it there until you hear a sizzle. Then decrease to medium low, give them a good toss and leave them be. Every 3 or so minutes, shake the pan to prevent burning or sticking. Once one side is crisped well turn them over. When the potatoes are to your crispness, place them in a large bowl and add Old Bay seasoning. Toss the potatoes and evenly coat them. Place the potatoes in an oven safe dish, sprinkle with cheese and place in the oven until the cheese is melted. When melted, remove and top with bacon.